Lanzini back on top as Wilshere stock drops

Posted by Sean Whetstone on August 18, 2019 in News, Whispers 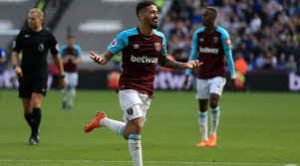 Manuel Lanzini was back on top of the Claret and Hugh readers ratings as the only player to manage a seven score in this weekend’s ratings.

The Argentine Hammer managed an average score of 7.37 voted by hundreds of CandH readers post-match.

Declan Rice was the last Hammers player to feature in the sixes with an average score of 6.25.

Top of the fives was Robert Snodgrass on 5.96 followed by goalscorer Javier Hernandez on 5.68.

The final two scores in the fives were Issa Diop on 5.37 and Ryan Fredericks on 5.3.

← Football VAR needs to learn from other sports
Anderson/Haller update →

15 comments on “Lanzini back on top as Wilshere stock drops”