There is very little chance of Manuel Lanzini leaving West Ham this summer.

The Hammers star has been linked with a potential move to Turkey, with Besiktas said to be interested in doing a deal for the Argentina international. 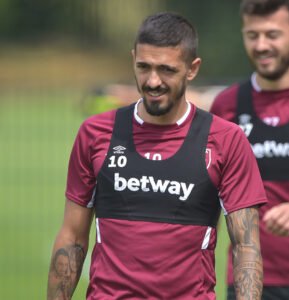 That report, though, seems to be based on the idea that Lanzini only has a year left on his contract but that’s not true; West Ham have a two-year option on his deal and are likely to trigger it.

The Hammers actually have some issues at midfield, with there being a real lack of options despite the signing of Flynn Downes from Swansea, particularly after Mark Noble retired and Alex Kral departed.

There is precious little chance of the Hammers allowing Lanzini to leave, as a result, because he remains an absolutely necessary part of the squad.

It would take a big bid, and the report claims he would cost around £10m; do us a favour!