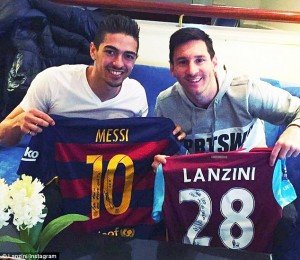 According to Spanish newspaper Don Balon, Barcelona’s Lionel Messi has told his teammate Luis Suarez that Manuel Lanzini would fit in perfectly at the Camp Nou. Lanzini has chalked up 18 goals and 15 assists in 96 appearances for West Ham thus far.

He scored his debut goal for Argentina earlier this week much to the delight of Messi watching from the bench. Lanzini has recently declared he is very happy at West Ham but accepts he does not know what will happen in the future.

“I’ve always said I am very happy at the club and it’s a club where I feel very comfortable and I really enjoy working with this group of players,” Lanzini told West Ham’s official website.

“I’ve been here for three years now and I get on well with a lot of people. We have a lot of big personalities here and big players here and I truly get on well with everyone at the club. I always give 100 per cent for the club. I don’t know what will happen in the future, but today I am very, very happy and I love playing here.”

However, if reports are true, a big bid from Barcelona might be too good for the player or the club to turn down.