Posted by Sean Whetstone on December 2, 2017 in News 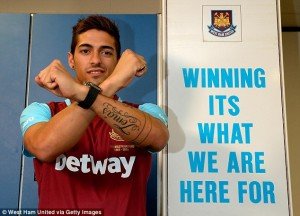 Spurs are interested in a move for West Ham midfielder Manuel Lanzini a report by ESPN claims this week. The report says  Mauricio Pochettino is a big admirer of his fellow Argentine Lanzini and feels he would be a valuable addition to his squad.

Pochettino is looking to add more creativity to his side to help provide better service to Harry Kane and is said to be ready to test West Ham’s resolve to hang onto Lanzini.  The Argentine is under contract at West Ham until 2020 and David Moyes would be reluctant to lose one of his key players in January with the club in the middle of a relegation battle.

Lanzini joined the Hammers initially on loan from Al-Jazira of the United Arab Emirates in the summer of 2015, before making the move permanent the following summer for £10.7m. His valuation has since soared to over £30m.