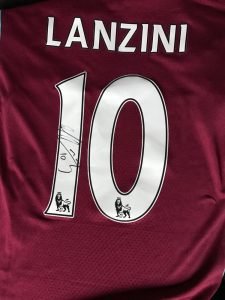 West Ham’s Manu Lanzini will be given a fitness test before the start of the game against Manchester United on Sunday afternoon.

And it means that Pablo Fornals will presumably stand by to make his debut if the Hammers play maker fails to make the 2.00 pm kick off.

Jack Wilshere too will enter the selection frame as the manager weighs his various midfield options which could also bring Robert Snodgrass a surprise call-up.

Explaining the situation surrounding the Argentinian, the manager had declared at his press conference today: “Manuel Lanzini also has a problem that we will review tomorrow before the game.”

However, there is no further news – quite rightly in our opinion – as the Hammers boss makes final decisions ahead of a game which could life the Irons three points clear of the Reds with Arsenal, Leicester, Chelsea, ouselves  and Spurs all locked on eight points.

Leicester and Spurs clash in the midlands whilst Arsenal are at home to Villa and Chelsea entertain Liverpool on Sunday.