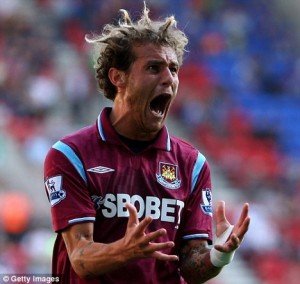 Diamanti’s debut goal for West Ham came when he converted from the spot against Liverpool. There was controversy around the penalty, suggesting the 36-year-old kicked the ball twice.  “Pepe Reina screamed and complained. He said I’d made two touches,” he told Sky Sport, as quoted by Il Posticipo and translated by SportsWitness

Diamanti admitted his compatriot Zola helped him settle quickly with the Hammers saying “With the help of Zola, I managed to settle down. Leaving West Ham was a mistake”

The Italian left Brescia for Bologna, before making the move to China in 2015, joining Guangzhou Evergrande.

A brief loan spell with Fiorentina preceded a move back to the Premier League. Diamanti joined Watford in the summer of 2015, before returning to Italy for spells with Atalanta, Palermo and Peruggia. The 36-year-old made his last move in the summer of 2019, when he joined Australian A-League outfit Western United FC. He was also made captain at the start of the season.

4 comments on “Leaving West Ham was a mistake says Italian”