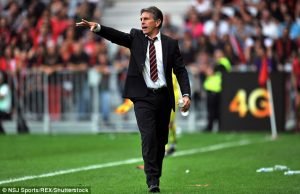 Puel is under extreme pressure

Leicester City up next and they have as many problems as us – if not more.

This is a a club with ‘previous’ of not playing for their manager as we shown dramatically after ‘Tinkerman’ Claudio Ranieri won the title and then ran into the full fury of a dressing room discontent with his methods the next season.

The players disapproved of him regularly changing the team and the board brought in Craig Shakespeare before binning him for Claude Pue.

The Frenchman then went on a run which took the Foxes to just outside the Europa Cup positions before becoming the new ‘let’s change things’  Ranieri.

Every midlands journalist and the former players I have spoken  has explained that there is a mutiny going on in the dressing room and the record of four wins from the last 16 PL games and one point – a 0-0 draw against Southampton in the last four –  suggests they ain’t wrong.

City also suffered a walk out from Ryan Mahrez who wants to play for Manchester City earlier in the season and is a shadow of the player he was in that title winning side and on Saturday the team were trounced 5-0 by Palace with Marc Albrighton red carded and unavailable for Saturday.

The moneybags Leicester board have shown themselves more than ready to swing the axe and a second’s notice and there are even rumours Puel could be gone by the weekend which seem unlikely given how close we are to season end.

There’s much to be encouraged about in the Foxes scenario for us and if everybody can get their heads together and David Moyes actually decides to give it a real go we can be safe by this time next week.

Come on YOU IRONS