Let’s hope players sort this out once and for all 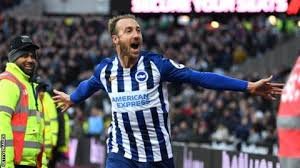 Brighton’s Glenn Murray has big reservations about playing on.

Ok, here’s the answer – the PL season can be finished by playing 10 minutes each way five a side games!

The five will have been tested and the games can be played in school halls – now empty – and after deep cleansing!

Well, it’s about as ridiculous as everything else I’m reading for Operation Restart.

The PL’s plan to restart the season it seems under any terms is utterly ludicrous – more subs, the game reduced from 90 minutes and on neutral grounds are among the suggestions – all of which will change the season out of any recognition.

Preserve the dignity of the League? OH PLEASE

Question: Would we have accepted any of that – even if these circumstances could possibly have been forseen when we bought our season tickets?

The whole thing is a nonsense but hanging in the background to all this is the answer l – the players who actually have to go out there and put themselves on the line.

I’ve believed from the start of this that no player – locked up in quarantine  for say three weeks away from his family and worrying about them all – can be mentally fit to play vital games.

How can any of them remain focused on a relegation battle which can change the course of their club’s history in such circumstances?

No doubt they will find themselves under pressure from the club owners to play. I hope they resist and show the common sense safety first and family values approach that are required in times such as this.