Lights going out for Lamps!

Whatever you may think of him and there’s plenty of views as among Hammers we have to accept that he has terrible judgement when it comes to picking clubs to manage! 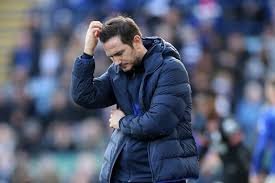 He did alright at Derby and then got the Chelsea job on the basis of being a club legend. He walked into a club in the midst of a transfer embargo and blooded a fair few kids, bringing through the likes of Mason Mount, but he was eventually sacked with the club suffering five defeats in eight games as a small dressing room mutibt started against him.

They have since appointed Thomas Tuchel and gone on to win the Champions League.

Now, he’s at Everton, and they’re sliding towards the Premier League abyss.

Wednesday night’s clash with Burnley was billed as must-win. They lost after being beaten by us on the Sunday previous!.

A 3-2 defeat at Turf Moor has sent them ever closer to the previously inconceivable thought of relegation. That’s Everton, who have been relegated just once in o0ver 70 years and never from from the Premier League .

Frank is now leading the betting odds to be the next Premier League manager sacked. Duncan Ferguson is, as ever, the favourite to replace him.

It might even be something would be a miracle if he saw the end of the season.

The lights look as though they are going out for Lamps!

← Dec’s footballing father figure: ‘Keeping him is down to the Hammers but forget talk about him being a Chelsea fan
Report: Hammers eyeing new midfield name →
Click Here for Comments >