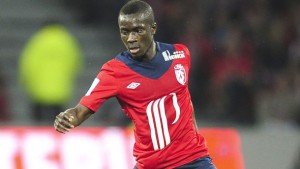 ccording to French Radio station RMC West Ham have made a bid for Lille defensive midfielder Idrissa Gueye of €8m. Marseille have put a €7m offer on the table while Crystal Palace are said to have table a €1om offer. According to the report, the player might lean to England because of the more favourable salary he is being offered.

Lille midfielder Idrisse Gueye is keen to move to the Premier League and previous interest from the Hammers may have encouraged his hopes of getting a deal at the Boleyn. The Senegalese international helped take the Lille side to an eighth place finish last season during his 32 games for the French outfit, scoring four goals.

Southampton and Crystal Palace have all been tracking the bruising midfielder said to be valued at £7 million.

The player said he would sit down with Lille and decide which club would be best for him but offers obviously need to be made first!

He told French publication La Voix du Nord: ” I have a contract with Lille until 2018.  Admittedly, there are contacts and there will be offers.

I will have to look at it all and decide what suits me best. “[I will] find the offer that will allow me to grow, to allow me to take new steps to be in line with my ambitions.

“But I feel good at Lille and if I was to stay here, it would not be the end of the world. Everyone knows that England has a league that attracts me, even if I am not closing the door on going to other leagues.”