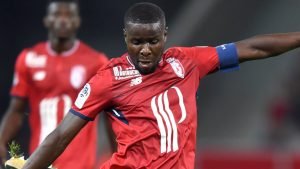 West Ham have had a loan offer rejected by Lille this evening for defensive midfielder and captain Ibrahim Amadou, according to French paper L’Équipe.

The Hammers reportedly offered a loan fee worth £2m with an option to buy clause worth a further £14m. Reports suggest Lille could be willing to do a deal with West Ham if an agreement sees an obligatory option to buy which confirms that Les Dogues will receive funds by June 2018.

Yesterday Crystal Palace also had a loan offer with an option to buy worth £16m for Ibrahim Amadou dismissed out of hand by Lille, according to Sky. They say the Ligue 1 side regard the bid which is Palace’s third for the player as derisory and not worthy of consideration.

The Eagles sent a personal representative of club chairman Steve Parish to Lille to watch transfer target Amadou in action against Strasbourg.

Amadou is valued at about £20m but Lille’s financial problems mean they could sell for less. The Ligue 1 side need to raise €25m to avoid potential relegation to Ligue 2 for breaking French financial fair play rules.

← Thank God, the lies and fiction will soon be over
Moyes praises Mario as Irons grab precious point →
Click Here for Comments >