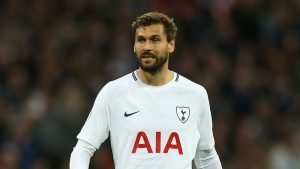 Tottenham boss Maurico Pochetinno may have thrown Fernando Llorente’s future into the West Ham melting pot whilst sending out mixed messages on the striker’s future.

Spurs – despite allowing the striker to walk away at the end of his deal this summer – are believed to have  offered the striker a new contract on reduced terms.

Pochettino has told The Mirror however that he isn’t the person to ask about a potential deal for the 34 year old.

The Hammers, meanwhile could yet be interested in free signings and Llorente fits the bill although  his £90k a week wages given his age would be an issue.

Pochettino apparently has no idea whether the player wants a Spurs return and made it clear he isn’t the  person to ask about the matter, presumably suggesting it is in chairman Daniel Levy’s hands.

And that could be enough to tempt the Hammers should Pellegrini decide on a late move to beef up his front line.

ClaretandHugh says: Llorente has long been mentioned as a Hammers possibility of course but at 34 years old and with a two year deal probably the least he would want, a big question is immediately asked. Pochettino, in not ruling out his own interest, looks likely to stoke up interest elsewhere and at this stage of things a Hammers move for the front man may be about the best we can do. He has done a job for Tottenham when Kane has not been available but he has not been prolific at either Swansea or north London. If he were available however, he could be a reasonable shout, given our need for someone with Premier League experience as up front back-up. However, it seems more likely that he may go back to Spurs anyway should any terms we offer be no better than those he may receive from them in the meantime.