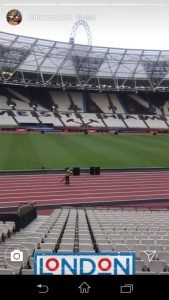 Football agent Adriano Spadoto caused speculation on social media that free agent Bernard was about to join West Ham after the agent posted photos inside the London Stadium tonight.

However, Spadoto was at the Stadium this evening as part of team Anderson as the Brazilian completes his deal in a club record £46m transfer.

Club insiders admitted they approached Bernard’s representatives a month ago but were quoted £200,000 a week for the player so quickly cooled their interest.

The Felipe Anderson was basically completed today alongside centre-back Fabian Balbuena but we may have to wait until Monday for the official announcement.

Anderson will cost combined £46m in transfer and agent fees while Balbuena has cost £3.5m for the release clause from Corinthians. Their transfers will bring the committed spend around £100m this summer.

The pair’s capture will bring the total number of summer signings up to seven.

← Poll: What should be done with the World Cup statue?
Fabian Balbuena is a Hammer →
Click Here for Comments >