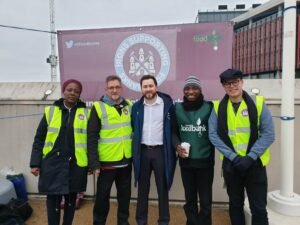 The news comes after Liverpool has donated £40,000 to Fans Supporting Foodbanks (FSF) to help keep the charity ticking over during the Premier League hiatus.

Officials at Newcastle United have also donated food which was to be sold at Saturday’s game against Sheffield United to charity after the clash was suspended due to coronavirus.

The Newcastle West End Foodbank will receive the items – which total 1200 pies, 300 portions of cold meats and several pints of milk.

Brighton and Hove Albion have said all food from hospitality lounges and retail kiosks will be donated to the city’s homeless.