Posted by Sean Whetstone on January 4, 2016 in News 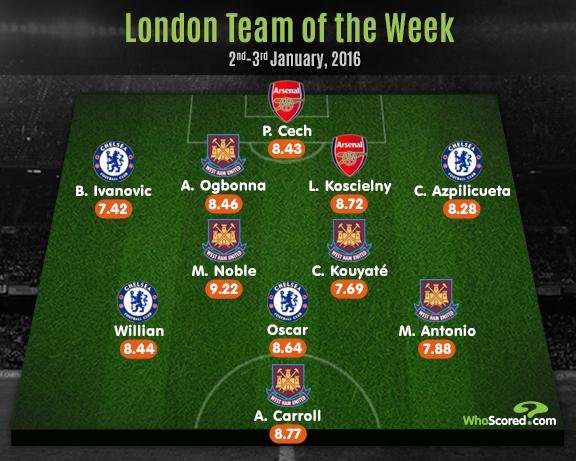 The first London team of the week of 2016, compiled by Whoscored.com has been published  in the London Evening Standard and it includes five Hammers.

On West Ham the Standard says

“Unquestionably the star performers of the weekend were West Ham, a fact reflected by the presence of five of Slaven Bilic’s side in our selection. Mark Noble is the capital’s well-deserved star man with a remarkable score of 9.22. That can be little surprise after a display that saw the captain make five crucial tackles and provide an assist for Andy Carroll.

The West Ham big man is another who few would be surprised to see appear in our selection after a performance that reignited debate over whether Carroll could be an option for Roy Hodgson’s Euro 2016 squad. His goal was coupled with a hugely impressive nine aerial challenges won.

Angelo Ogbonna was the star Hammer in a dominant defence that, for the second meeting in a row, held Liverpool’s attacking riches goalless and earns another spot in our team of the week after appearing in the final edition of 2015.

Cheikhou Kouyate and goalscorer Michail Antonio round off the Boleyn Ground representatives in our side to cap off a dream weekend for West Ham.”

← What next for Reece Burke?
Irons speak out on £18m Carroll ‘move’ →
Click Here for Comments >