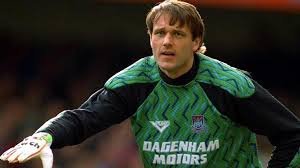 Ludo Miklosko has been crowned the greatest West Ham goalkeeper in the Premier League era.

The 58-year-old retired Czech goalkeeper collected 49% of the 800 votes cast by Claret and Hugh readers.

Current keeper Lukasz Fabianski was placed second with 25% of the vote. Robert Green was third with 17% of the votes cast.

Mikloško started his career in his native Czechoslovakia with Baník Ostrava.His talent was noted by Lou Macari, who signed him in February 1990, just before his resignation and the appointment of Billy Bonds as his successor, for a fee of £300,000. His first game was on 18 February 1990 in a 2–2 away to Swindon Town. His fourth game was the second leg of the League Cup against Oldham Athletic. West Ham had lost the first leg, 6–0 with Phil Parkes in goal in what proved to be his last game for West Ham after an eleven-year association with the club From that point until season 1997-98, Mikloško was the first-choice ‘keeper.

Ludo played 374 times for the Hammers