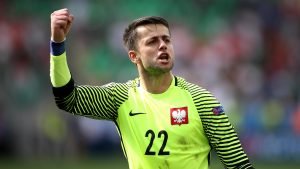 Lukasz Fabianski flew to London before joining the Polish squad in Russia to take a medical with West Ham.

The 33-year-old keeper had been training with the Polish national team at their pre-World Cup camp at Arłamów, a mountain resort in southeastern Poland. That training camp finished on 7th June and Fabianski is understood to have secretly flown to London directly afterwards to undertake a discrete medical with the Hammer

The Swansea keeper is now in Russia in Sochi at Poland’s World cup training base staying with his squad at the Hyatt Regency Sochi. On Tuesday he and his squad travel to Moscow for their first game in Group H against Senegal captained by Hammer Cheik Kouyate. Fellow countryman Wojciech Szczesny is likely to get the nod ahead of Fabianski in the starting lineup.

Despite the player being away on International duty at the World Cup, the transfer is still expected to complete in the near future.