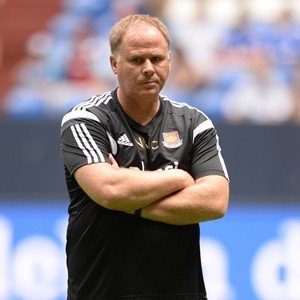 Polite Neil McDonald has this morning made it clear to Senegal they have little reason to complain about the Diafra Sakho situation.

The nation’s football federation has been loudly complaining about the Hammers keeping them in the dark about the striker’s situation and threatening to invoke FIFA rules against them.

This effectively means they will do all they can to prevent him playing for us should he recover before their team exits the African Nations Cup.

ClaretandHugh reported yesterday that the club has invioted them to send their doctors to London to check out the player whilst providing them with full medical reports and scans.

And in the absence of Sam Allardyce from this morning press conference ahead of the Swansea game Macdonald confirmed our story.

He explained: I think we have respected them by giving them regular updates on his injury and keeping in constant contact. We’ve asked them to come across and assess him.

“He’s had scans at the club, not to back it up but to prove that he is injured. All we can do is give them as much information as we have.”

The Senegalese had spoken of a lack of respect being shown by the Hammers but the assistant boss said: “I think lack of respect may have been taken out of context as Cheikhou Kouyate has gone. We’re not trying to stop anyone from representing their country, the lad’s injured.”