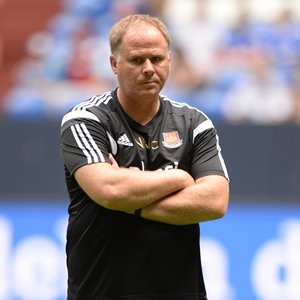 Neil McDonald emerged with mixed about yesterday’s point at Swansea.

Like the rest of us he was happy to get a point whilst sorry that we had failed to bring home all three after Andy Carroll’s fabulous strike.

He told www.whufc.com “We limited them to long-distance shots and I think they only really had one good chance in the box when Bafetimbi Gomis puts it over the bar.

“We put our bodies on the line, defended smartly and tried to not to not give them any space in behind and when they tried to play through us, we marshalled that quite well.

“We created a few chances ourselves and we are disappointed that we didn’t get the second and kill them off.”

Having taken responsibility for the team in Sam Allardyce’s absence with a chest infection he explained: “He was watching the game on the live stream. So he had a few tips on the phone for us to pass on the players. He’s taken time off to recover and I’m sure he’ll be fine for Tuesday.

Macca added: “”I think the formation worked well. It was always going to be that Swansea got lots of the ball and we had to deny them the space they needed and I thought we did that very well.

“We said to the players at half time that we had to get the first and the second pass off better and if we did that then we would find space to counter attack. We saw lots of the ball and we did that better in the second half and that’s why we got the chances

“You always have to respect the point and that’s four points we’ve taken off Swansea from the two games this season.”