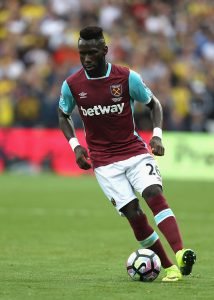 Arthur Masuaku’s return made a world of difference to the Irons against Southampton.

And the left sided midfielder’s amazing assist for an Arnie goal was as good as it gets anywhere in the world – a cross of perfection…a thing of beauty!

There’s no question the lad is back with a vengeance and told the official site: “It was a good feeling to be back on the pitch and I felt good during the game, except for maybe the last 20 minutes when I started to have cramps

“It was a great feeling to be back and play at home in front of the fans. They were behind us until the end and it felt good to be back in the team.

“From the very first minute we were on the front foot and got at them. I think we played better than them, especially in the first half, and we won in the end and got the three points, which was the most important thing of all.

“For any player, it is important to help the team and to get an assist Marko was good. Sometimes it works when I cross the ball and other times it doesn’t work, but this time it was a good one and hopefully I can do this kind of thing again in the next games.”

He was also deeply impressed with another returning player – Edimilson Fernandes saying: “Edi was fantastic for us. He is such a good player and he is young, so he still has time to learn.

“As soon as he is given an opportunity, he will always be good, especially in this game when we needed him and he responded.”

He’s now looking forward to Chelsea saying: “It’s a very difficult game, but we have to go there and play our football, play as a team and be hard to beat and why can’t we win?

“Everybody expected them to win the first meeting, but we played a very good game and we won, so let’s try to do the same again on Sunday.”