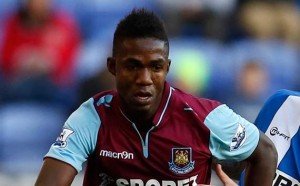 Modibo Maiga has received 48 hour ban from Metz after failing to travel to their Ligue 1 fixture with Marseille earlier this month.

After making an impressive start to his Stade Saint-Symphorien loan period with four goals in his first 10 league appearances, but he has not featured in Metz’s last three matches.

After failing to appear for the Marseille trip he has not been picked by head coach Albert Cartier and there were even reports his loan spell could be cut short.

However, he will be available for selection this weekend against Monaco after serving a two-day ban that was announced on Wednesday.

A statement read:”Metz striker Modibo Maiga did not appear at the airport the day of travel to Marseille,” a statement read. “He was punished with a two-day lay-off by the disciplinary committee of Metz.

“In accordance with the provisions of the ban he will therefore be able to return to training on Friday 19 December.”

Maiga will be hoping to make an impact for Metz in the club’s upcoming games to impress Mali coach Henryk Kasperczak ahead of the Africa Cup of Nations in January.