Posted by Sean Whetstone on April 2, 2020 in News, Whispers 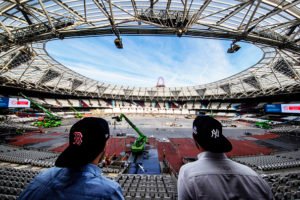 Major League Baseball, like many sports leagues around the world, has been shut down indefinitely because of the current situation.
Spring training has been suspended and Opening Day has been pushed back to at least mid-May, and that remains subject to change as the situation develops.

On Wednesday, MLB announced the 2020 London Series between the NL Central rival Cardinals and Cubs, originally scheduled for June 13-14, has also been cancelled.

The news has been expected for weeks and is now official. They say it should be noted the London Series has been cancelled, not postponed. MLB will not even attempt to reschedule the event for later this year.

Green Day have already postponed their planned Asia tour, which was due to visit the likes of Singapore, Thailand, Taipei, Hong Kong, South Korea, and more in March. “We know it sucks, as we were looking forward to seeing you all, but hold on to your tickets we’ll be announcing the new dates very soon,” they announced on social media. They were due to due their tour to Europe and to the London Stadium on 26th June but now also seems in serious doubt.

UK Athletics are due to stage the annual Anniversary Games on 4-5 July at the London Stadium but the cancellation of the Tokyo 2020 Olympics must now put that in serious doubt.   It is becoming increasingly likely that the London Stadium owners will leave the stadium in football mode through the summer which will save them an additional £6m.

One comment on “Major League Baseball cancelled at London Stadium”