Who would’ve thought West Ham would be in the top four with just 12 games of the season left to play?

That’s the question posed by the Daily Mail sports pages today and the answer it’s probably fair to say is “absolutely nobody.”

Two or three more signings and we could be onto the “next level” which has been mentioned for so long.

That’s it’s coming under a proper manager from whom everything he’s touched has turned to gold is great and we can only pray that he leads us into that Champions League promised land.

Frankly from the little I”ve seen of such as Chelsea – with that highly excitable new manager of theirs – and Manchester United – we can count ourselves as just as good.

Watching them at the weekend I had no fears of visit to United and from the Blues over the next few weeks.

In discussing out top four chances the Mail says: Moyes’ men gave the champions-in-waiting a game at the Etihad and could’ve come away with a point on another day. Fans were left feeling proud of the effort and performance, rather than disappointed with the loss. 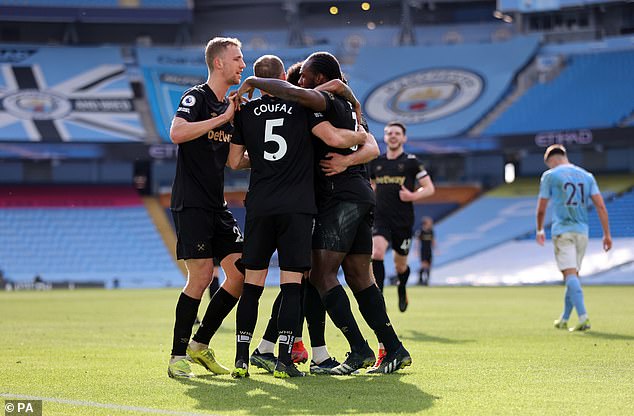 There will be no hangover from that result when West Ham face Leeds next Monday, although a tough run of games against United, Arsenal, Wolves and Leicester could be make-or-break for their Champions League hopes.

Hammers favourite Joe Cole is certainly not ruling his old side out, telling BT Sport on Saturday: ‘You get into the top-four this year and it’s one of the biggest achievement in the club’s history.

‘If you keep going in the right direction and into the upper echelons of the league regularly, you’ll attract players because you’re London and it’s a great club.

‘It’s exciting times. I’d love to see a Barcelona or an AC Milan coming to the London Stadium because the fans deserve it.’

3 comments on “Make or break time for Champions League spot”