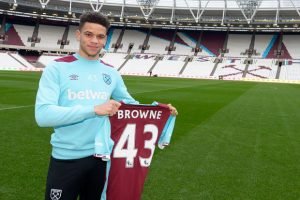 Browne who will join the West Ham first team for pre-season training camp in Switzerland will be assessed by Manuel Pellegrini and his backroom team before any decision to loan him out is made.

Browne had a successful loan spell at League One side Oxford where he scored eight goals in 42 appearances.

Browne joined West Ham at the age of eight and progressed through the academy at the club before signing his first professional contract in 2015. He signed a new three and a half year contract in January 2017 which keeps him at West Ham until the Summer of 2020.

With a year left on his Hammers contract, this season it is make or break for the youngster.