The French defender was forced off in United’s 1-1 draw with Chelsea, having seemingly sustained a hamstring injury. 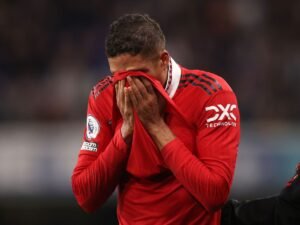 Varane has played 10 times in total for the club in the Premier League this season but is now set to miss this weekend’s encounter with the Irons.

But the injury is so serious that he is unlikely to return before the World Cup, meaning he could miss out on being included in France’s squad. Cristiano Ronaldo, by comparison, is set to be in the squad.

Ten Hag, speaking before their Europa League clash with Sheriff, was asked about potential injury setbacks and he replied, as per Football.London: “Rapha Varane isn’t in the squad. He will be out, certainly until the World Cup so he will not play in this block [of games] for Man United.”

United have been in decent form in the league and are unbeaten in their last four games; they have beaten Everton and Spurs, and drawn with Newcastle and Chelsea.

The Irons won at Old Trafford last season in the League Cup but have not won at the stadium in the Premier League since 2007, when Carlos Tevez infamously scored the winner.