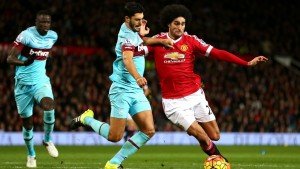 Manchester United will be without Marouane Fellaini when they face West Ham next Tuesday.

Fellaini will serve a three-match suspension with immediate effect after being charged with violent conduct which was not seen by the match officials but caught on video.

The Manchester United midfielder along with Leicester City defender Robert Huth were involved in a 21st-minute incident during their match last Sunday.

Both players accepted the charge, however Huth contested that the standard penalty of a three-match suspension would be ‘clearly excessive’.

This claim was rejected following an Independent Regulatory Commission hearing today [Thursday 5 May 2016].