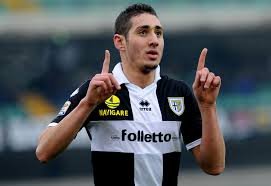 Transfer gossip is always fun but as the season winds down that’s exactly what it is at West Ham right now – GOSSIP – nothing more, nothing less.

With the club’s managerial situation almost certainly in a state of transition no names we read at this stage of things can be taken in any way seriously.

I mention this only because at the same time as I was earlier writing that the managerial hunt was still going on and that Rafa Benitez was a hopeful rather than optimistic target,new player faces were being put in the frame.

One was Parma striker Ishak Belfodil who had apparently become a target amid claims Torino have entered the running for him.

The report adds that ” the Hammers are determined to strengthen their forward line,” a strange claim given David Sullivan has admitted defensive signings will be the priority.

Take it all with a pinch of salt because with every passing day it looks as if a new man – whoever that maybe – is on the way in anything you may or may not read in the media is speculative at the very best.

Expect the action to stay in towards the end of May or early June when some serious decisions will have been made.