Posted by Sean Whetstone on March 19, 2020 in News, Whispers 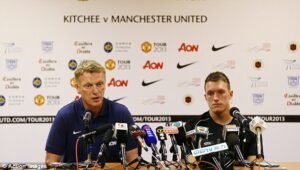 Reports that David Moyes wants to be reunited with Manchester United defender Phil Jones are wide of the mark.

The Daily Mirror claimed that Steve Bruce wants to offer the centre back a regular start at Newcastle after being sidelined for the Red devils. The injury-hit star is reported to be open to a move as he seeks more regular game-time after just eight appearances all season – the last in the 6-0 fourth round FA Cup romp at Tranmere in January when he scored. The former England star has fallen down the pecking order at United and is now considered the fourth choice behind Harry Maguire, Victor Lindelof and Eric Bailly.

Jones signed a new contract a year ago tying him to United until 2023 with a year’s option after that but is said to be available for around £12m.

The report finishes by suggesting Newcastle are likely to have competition with West Ham boss David Moyes also interested in a move for Jones this summer.

Moyes has already confirmed he is only interested in players aged 25 or under unless they are exceptional and Jones doesn’t meet that criteria.

Moyes is lightly to look towards the Championship and Europe to find young, hungry and cheaper alternatives with a limited budget this summer.