Evening game likely for last game at the Boleyn 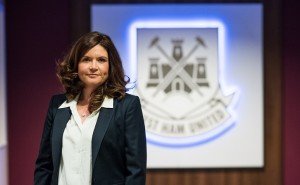 West Ham has confirmed for the first time that given our FA Cup progress, an evening game will most likely be the last game at the Boleyn Ground and not the weekend game against Swansea City, although they did add that is not 100% confirmed as yet and still requires official confirmation from the Premier League.

Members of the West Ham Supporters Advisory Board (SAB) were given an update this evening at the Boleyn Ground by the West Ham Executive Director of Marketing and Communications, Tara Warren.

A senior source close to SAB told ClaretandHugh this evening “As soon as it is confirmed we’ll confirm officially on our website.”

Tara was joined this evening by Academy Director Terry Westley who spoke about the progress of the West Ham Academy since he joined from Birmingham City. The news that the last competitive game to be played at the Boleyn Ground is likely to switch from Swansea City to Manchester United will come as little surprise to most.

Earlier today, Manchester United confirmed their away match on 23rd April against the Hammers would be moved because either West Ham or United will be now be guaranteed a place in the FA Cup semi-finals due to be played the same weekend as our league match.

ClaretandHugh understands that planning is already well underway to work out the logistics of switching the ‘Farewell to Boleyn party’ from a weekend to mid-week evening under the famous lights should it be confirmed.