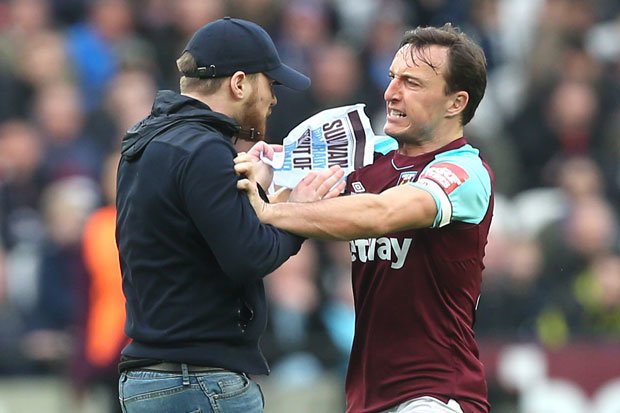 A West Ham fan who claims to be the pitch invader who was tackled by Mark Noble has made a statement on Social media.

The supporter says “I want to write to Twitter to West Ham fans, my fans, my beloved team, it was a moment of stupidness from me but passion took over and I stepped  (over) the line and went on the field but I went on there with two things in my head. One, to get the point across I want the board out which was on the poster in my hand and also to wake the team up. You can clearly see that I’m waving my hands up at the players to wake them up, I was even shouting Wake Up West Ham and then out of nowhere Mark Noble came at me. One, I never said anything offensive to Mark Noble, he was clearly pissed off with the situation, but for someone, I look up to and watched for years done this. I’m embarrassed, ashamed but he didn’t need to do that. I was going to run straight off after getting to the centre circle. All I want you lot to know is I didn’t say anything offensive to Mark Noble and I am sorry.  COYI”