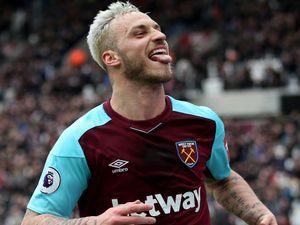 ould Marko Arnautovic be an outside bet for the Premier League Golden Boot in the 2018/2019 season?

The 29-year-old Hammers scored his fifth goal in four pre-season games yesterday as West Ham played Ipswich. He has scored in every pre-season game he has been involved so far carrying on his form of the later part of last season.

Most bookies have him as an outside 66/1 chance to win the golden boot but BetFred, Unibet and  Royal Panda will all offer fans 80/1 with all three offering signup offers of free bets worth between £20 and £3o.

Arnie scored 11 goals and made 6 assists last season but most of these came in the second half of the season after David Moyes made him a striker. Anautoroic finished the Gold Boot competition in joint fourteen lasts season but will be looking to at least double that this season.

Salah won last year’s golden boot with 32 goals with Harry Kane on 30. Aguero came in third on 21 with Jamie Vardy on 20.

← Poll: What would you do with Robert Snodgrass?
World cup defender report wide of the mark →
Click Here for Comments >

6 comments on “Marko’s odds of winning the golden boot”