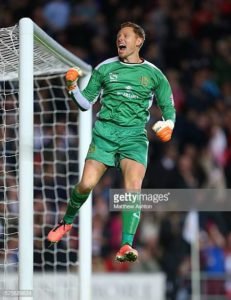 David Martin has praised the Hammers claret and blue travelling army to the heavens.

Martin has loved every minute of his time in the team which may now be coming to an end with the likelihood of Fab’s return but as a Hammer from childhood he knows all about the passion of being a Hammer.

He smiled: “They were unbelievable and so much louder than the home fans!

“You can tell they are the die-hards who come down and support us. We’ve not had a good time recently but we needed them and they got us through it.

“At the end, I could hear them drawing us and they made such a difference and I’m so proud to have played in front of them.

“For me, personally, it’s an unbelievable feeling playing in front of people I know and from my area. I need to go and get my hair cut and I meet West Ham supporters so it’s nice going into those places after a result like that!

“It means the world to me, it really does. The lift it gives me personally and for all the lads, you can feel the vibe around the place and it’s a great feeling.”

Martin cracked a little joke on a West Ham TV interview towards Michail Antonio, saying that he needs to stop copying him by using his hands!

David has done himself great credit since gaining his place at the expense of error-prone Roberto becoming the second Hammer from the Martin family to become a hero.

Whether he will become the number two this January given how well he performed remains to be seen with the Irons reportedly tracking former keeper Darren Randolph.

Frankly, there are other positions to be filled of much higher priority and it seems more than reasonable to allow him to carry on as Fab’s back-up.

Either way the Hammers faithful will always be grateful that the 33 year old rescued us from the horrors of the Spanish stopper.

One comment on “Martin honours the Hammers travelling army”