Frank McAvennie has confirmed that the Hammers have the opportunity to sign Junior Firpo from Barcelona this summer.

The full-back has been linked with a potential move to the Irons this summer, with AC Milan also interested. 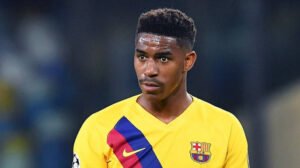 Milan are reported to have opened talks with Barca over a deal but they want him on loan, instead of on a permanent deal.

Barca, though, want to raise funds and Macca says he has spoken with the player’s agent over a potential switch, and believes that a deal worth £15m would see him come into the London Stadium.

He said: “I know the boy, he’s talented.

“I spoke to his agent a couple of days ago. Barcelona are trying to offload players, they have no money. I’m hearing it will take £15million.

“He’s a good talent. I don’t see why he couldn’t come to West Ham.

“It’s a gamble coming from Europe, they need to adapt. If you’re even in Barcelona’s third team then you’re clearly good.

“He’s a talent and West Ham need talent. If he leaves Barca, he’ll have a point to prove and that’s what you want.”

Firpo has been with the Catalan club since 2019 and has made a total of 41 appearances for the club, primarily at left-back.

He is a former Spain U21 international but he has declared for the Dominican Republic at senior level.

The defender currently has a contract until 2024 but Barca are in dire financial straits and need to raise funds this summer.

McAvennie was speaking to Football Insider.