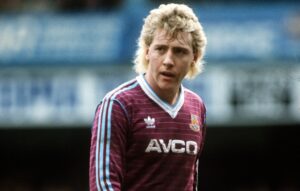 Frank McAvennie knows a thing or two about relationships with fellow strikers.

And he has a very definite view on why it would be bad news for Marko Arnautovic to return to the Hammers.

So far this season we have had the former striker linked with us at 32 years of age after two or three season in a sub standard league along with Olivier Giround at 34 – not the best is it?

The former Arsenal man looks set for a departure from Stamford Bridge this summer but thankfully it seems not to be to the Irons.

Macca, however, had an entirely different reason for the “Arnautovic can’t return ” statement while speaking to West Ham Zone.

And he explained it’s all about a peaceful dressing room revealing that he knows that wasn’t a happy place during the last six months of the Austrian international’s time at the London Stadium.

And he believes it would cause unrest again, specifically with him and Michail Antonio declaring: “It will cause frictions again because he will want to play up front every week and Michail will be arguing.

“What I know is the dressing room wasn’t a happy place during his last six months. You’re going to have a problem. Can I see him and Antonio playing together. No.

“He really disrespected the club. I don’t know if the fans want him back. The fans deserve better than that. But I don’t think it would be a good fit in the dressing room.”

← Pearce not signing deal until Moyes signs his!
Bring in youngsters pleas a false reality →
Click Here for Comments >