Posted by Sean Whetstone on April 25, 2016 in News, Whispers 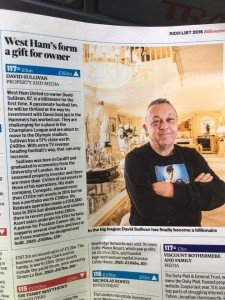 West Ham co-owner and joint chairman, David Sullivan is now a billionaire according to the 2016 Sunday Times rich list. Mr Sullivan crossed the £1bn mark after his wealth grew by more than £150m in the last year raising to the 117th most wealthy person in the UK.

The Times has calculated Sullivan’s 51 per cent stake is now worth a cool £400million valuing the club at over £800m. Away from football Sullivan runs three companies – Conegate Ltd, Roldvale Trading Ltd & Gc Co No. 102 Ltd according to the latest Sunday Times Rich List – with net assets of £414m plus a property portfolio worth in the region of £300m.

His property company called Conegate, owns property in London including Russell & Bromley’s flagship shop buildings in Oxford Street near to Bond Street tube station said to worth £55m on it’s own. That building earns £1.325m in rent per year. The 67 year old other investments include race horses, premium phones lines and publishing, including the Sunday Sport which  he reacquired for £50,000 in 2011. In the 2015 Sunday Times Rich list the he was credited with an £815m fortune.

The same list ranks fellow co-owner, David Gold’s wealth was estimated at around £300m in 350th place with his daughter Jacqueline Gold but the latest news would mean Gold’s 35.1% stake in West Ham has increased to around £280m on top of his business empire Gold Group International incorporating Ann Summers, Gold Aviation, Knickerbox, Greenwich House Properties and York Place.