Merson has a go over Arnie!

Posted by Dave Langton on February 2, 2019 in News, Whispers
Paul Merson has had a major dig at West Ham and Marko Arnautovic.

Arnie signed a new contract to end speculation of a move to China. 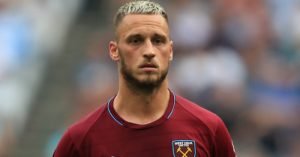 But the Irons have endured a serious dip in form, losing their last three games in all competitions.

Merson has had a major dig at the club as a result, insisting that Arnie will merely leave the club in the summer, regardless of his new deal!

Writing in the Daily Star, he said: “Marko Arnautovic signing a contract extension at West Ham is a farce – and I think there’s a massive problem there with or without him.

“They got desperate and threw more money at him to stay but why didn’t he start in the FA Cup game against AFC Wimbledon?

“They got thrashed and then put the news out straight afterwards. Come on!

“They are only delaying the inevitable because this will all come back up again in the summer and I won’t be shocked if he goes.

“He’s their most important player. He’s quick, makes runs, scores goals – when he fancies it.

“But over the last few weeks you wouldn’t have paid anything for him.

“It’s not all about him though. West Ham can’t use that as an excuse. They’ve been awful.

“And if the players have let this unsettle them then what does that say about them?”

← Diop on ‘Mission Salah’
Cole: Why I snubbed Man Utd to stay at Hammers →
Click Here for Comments >

6 comments on “Merson has a go over Arnie!”