Posted by Sean Whetstone on September 3, 2019 in News, Whispers 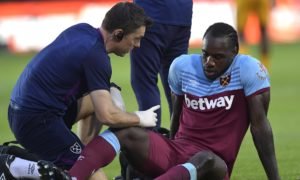 Results from the latest scan have revealed that Michail Antonio could be out of action for up to five months.

Last Thursday Manuel Pellegrini told reporters at Rush Green “He needs at least 48 hours to do his MRI scan and then we will see exactly what kind of injury it is.”

Antonio went down in obvious agony after just eight minutes into West Ham’s cup victory over Newport County last Tuesday. The club was trying to put a brave face on it last week by suggesting it was too early to determine the seriousness of the injury before a second scan and claimed reports of an operation plus a lengthy spell in recovery were premature.

A senior club source speaking to Claret and Hugh by Email this morning confirmed what most had already feared.

Antonio will undergo an operation for a grade three hamstring and is likely to be out of action for between four and five months. A five-month lay off would keep Antonio out until February with Manchester City away as a possible target return date on the 8th February.

It is Michail’s third serious hamstring injury for West Ham. In April 2017 he spent 124 days out of action after a hamstring tear later returning on August 10th the same year.  Last year in March he suffered another hamstring tear keeping himne out of action from 31st March 2018 until 10th Augusty 2018.