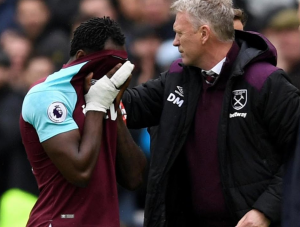 West Ham manager has confirmed that Michail Antonio faces surgery to be fit for the start of next season admitting he never recovered from an injury at the end of last season.
Moyes told reporters at the pre-match press conference this afternoon: “He’s going to have an operation on his hamstring and the biggest thing now is to get him ready for next season. We’ll miss his great strength and pace. He picked up a hamstring injury at the end of last season and has never really recovered from it. He’s had some big injuries since I’ve been here.”
On Manuel Lanzini injury and his fitness for Sunday’s game, the gaffer added: “He’s got a medial ligament injury. He’s able to run in straight lines at the minute. I wouldn’t completely rule him out but he’s a doubt.”
Permalink