Midfield pace and power – here’s who the Irons need! 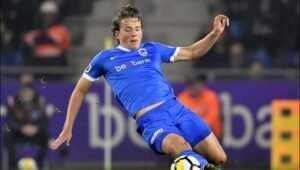 Watch West Ham regularly and closely and there is one glaring weakness in their game which – without a key signing in the winter – no manager will be able to sort out!

None of Mark Noble, Pablo Fornals, Andriy Yarmolenko, Jack Wilshere or  Felipe Anderson can provide the sort of drive required out of midfield but in 21 year old Norwegian and Genk midfielder Sander Berge, the Irons might just get the sort of  player they need.

Liverpool saw a €15 million bid turned down by his club Genk this morning but we understand the 21 year old may prefer a move to a club where he could expect immediate first team football.

That would almost certainly be the case at the London Stadium where he could also be employed in a holding or attacking role which has seen him score three goals in 15 games in the Belgian League.

Interestingly, along with that side of his game – he is also a fine defensive midfielder – and appears to be exactly what we need this winter!

He’s dominant in the midfield standing high at 6ft 4in and weighs in n at 96kg making him an absolute tank on the ball.

His involvement in Champions League  brought him to Jugen Klopp’s attention and we understand that the Hammers have taken note of the Norwegian’s progress this season.

Although his contract  doesn’t expire until 2021, there is understood to be an escape clause in his contract of around €18 million which could tempt the Irons.

← Poll: Sack or back the manager
Promises…promises but let’s get real as cracks appear →
Click Here for Comments >

5 comments on “Midfield pace and power – here’s who the Irons need!”