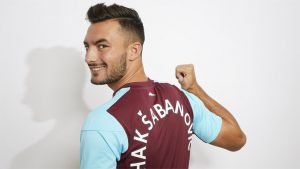 The  attacking midfielder could make a surprise return to the Irons first team squad if he continues his amazing early season form according to CandH sources.

The 20 year old has managed five goals and six assists in the last nine games for IFK Norkoping following an ill fated  spell at Malaga where he spent a season almost entirely out of the first team.

That led to the move back to his homeland where he has made 27 appearances and he has been on fire for the last nine outings.

Hopes were high for Haksabanovic when he joined the Hammers for just under 3 million euros in 2017 but he failed to make any first team appearances despite being hailed as the next best thing.

And it looked as though the only way was down when he arrived at Pellegini’s former club Malaga but made only two appearances.

That led to Mario Husillos  expressing  dissatisfaction with his playing time and he joined his new Swedish club in 2019 until the end of this season.

A source told us by e mail: “The boy is doing brilliantly now he is getting a fair crack of the whip and  being followed very closely by the management team. His best Hammers days may be in front of him!

We have some great options among the loanees with Cullen, Diangana and Saeed doing really well at their various loan clubs.”