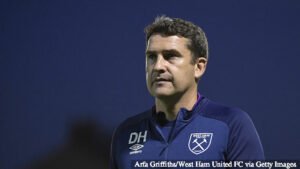 Dimitri Haljako has led the under 23s on a fantastic season

West Ham’s under 23s will have every right to feel very hard done by indeed should they not be promoted.

After a quite magnificent season which has seen them unbeaten in the League  they still don’t know whether or not they will be playing in League One next term having been relegated last season.

And this demonstrates that football’s authorities, and the Premier League’s in particular, appear to have little regard for any competition outside of their top division. We don’t need telling this is all about dough!

The reason given for the curtailment of the Under 23 programme was based on giving  “clarity” but the uncertainty surrounding the top division was of course allowed to continue unabated for weeks and still they are unsure whether Project Restart will get underway.

The under 23s haven’t even had their status for next season clarified but whatever happens we want to congratulate them and their lead coach Dmitri Halajko.

The only reason their season has been curtailed is because there’s no money in it which presumably makes it of little importance.

The bad publicity and PR the PL has brought to its own competitions one way and another is shocking. Personally I will never be able to see the competition in the same way again