Monk reckons Sam is boss of the year 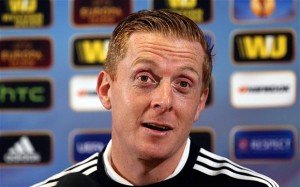 Swansea boss Garry Monk reckons Sam Allardyce deserves to be nominated as manager of the year!

The two sides clash in Wales later today with the Irons sitting in seventh place three points and two places above the Swans.

Monk has nothing but respect for the job Allardyce has done and believes he and Southampton’s Ronald Koeman have been the season’s outstanding bosses.

He said: “I think Sam would deserve to be nominated for the manager’s award. If you look at West Ham and Southampton, those are the two clubs who are far above where people thought they would be.

“All credit to Sam. He has shown his experience. He has been open-minded and he has adapted and you have to give him massive credit for that.

“It’s something I’ve looked at and it’s something to bear in mind for me, because he knows his stuff. I think Sam would deserve to be nominated for the manager’s award”

Swansea were convincingly beaten 3-1 at Upton Park earlier this season, with Andy Carroll grabbing two and monk knows his defence has to find a way of stopping him today.

He said: “Dealing with Andy Carroll is something we have got to put right. He is an incredible player physically. He is probably the most powerful forward in the Premier League and he has supremacy over everyone.

“Sometimes when the ball in is right, there’s not much you can do, but we have to try to stop him and that’s something we’ve been working on.”
Permalink

← Morrison: It’s all over!
Wonder goal won’t save Ravel →
Click Here for Comments >

9 comments on “Monk reckons Sam is boss of the year”