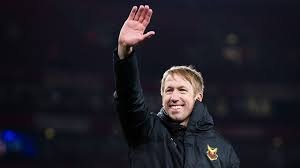 Graham Potter puts his hands up for a pay cut

The BBC reports Brighton’s chief executive, technical director and head coach Graham Potter have all taken a pay cut for the next three months.

Clubs have been criticised by British politicians for furloughing non-playing staff while paying players in full.

MP Julian Knight has called for the Chancellor to impose a “windfall tax” on clubs that refuse to cut players’ salaries while furloughing staff.

In a letter to Chancellor Rishi Sunak on Thursday, Knight, who is chair of the Digital, Culture, Media and Sport committee, suggested a deadline of 7 April for clubs to take action or be sanctioned.

“If the Premier League isn’t going to act to resolve this crisis then the government must step in by imposing a significant financial penalty on clubs to reimburse those hit hardest in the pocket,” said Knight.

Brighton chief executive Paul Barber said: “It is entirely appropriate that we play a very small part in reducing the financial burden.”

Barber, technical director Dan Ashworth and head coach Graham Potter have each taken a “significant” voluntary pay cut but no decision has been taken on whether to furlough any of the club’s staff.

“We have seen our income literally disappear overnight,” added Barber.