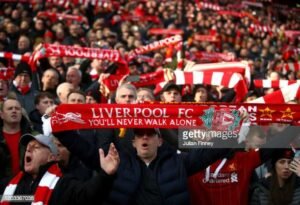 Cynical fans who still believe that clubs should be spending millions on players this summer may need to take a look at Liverpool’s financial results this morning.

Many fans still have the impression that West Ham and other clubs have been “milking” the covid pandemic for their own reasons.

But after Manchester City reported huge losses recently on the back of the lowest £70 million spend ever across the entire Premier League in the winter window, it’s clear the loss of fans in the stadiums is having a brutal effect on the game.

Maybe the losses suffered by City and now  Liverpool hastened thoughts of a European Super League.

Whatever the reasons there can be no doubt that when clubs explain their financial positions they are indeed telling it as it is.

And it also shows dramatically, that for all the emphasis on TV coverage and fees it’s the fans that remain the lifeblood of the game.

Meanwhile, Liverpool have reported a £46million pre-tax loss for the financial year ending May 2020 and that represents an £88m negative swing from last year’s position 12 months ago.

And the Mail reports it is believed the total impact of the pandemic will hit the club to the tune of £120m by the time supporters are allowed to return.

In March 2020 the club announced a profit of £42m, the fifth time in the previous six years Liverpool had been in the black, but that surplus was wiped out as a result of last season initially being suspended in March and then restarted behind closed doors.