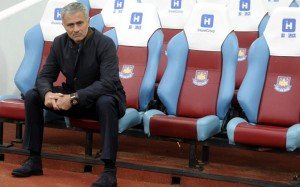 epa04993523 Chelsea’s Manager Jose Mourinho sits on his own before the start of the English Premier League soccer match between West Ham United and Chelsea at The Boleyn  in London, Britain, 24 October 2015.

Mischief-making Stan Collymore has got it all wrong!

I don’t normally take much notice of pundits these days but his thoughts that Jose  Mourinho could become West Ham boss at some point in the future is not something that  I want to let pass.

The former Liverpool and Villa player is usually on the lookout for a controversial comment or ten with which to fill his pundit bag.

But in suggesting that Mourinho could be a target for West Ham should Manuel Pellegrini fail to do the business at the club this season is a piece of nonsense too far.

Tweeting his views at the weekend he said: “Clever from Jose.

“Hasn’t been offered a club that he wants so far so sell himself on TV. Philosophy, humour, charm will have a chance to regularly to say “I’m here”.

“None of the top six need him, so Wolves (Mendes), Everton and West Ham managers in particular, watch your backs!”

It’s an easy call but the Mourinho factor was again illustrated to be un-required when his debut on Sky was marked by an attack on Frank Lampard’s team selection which drew a pretty pretty smart response from the former Iron.

Beyond that of course, even were Pellegrini to fail  he would be far too expensive at around £14 million a year with the requirement of a massive transfer budget available to him.

On top of that is he seeming ability to court trouble even where it doesn’t exist and at a club now becoming relatively stable under Pellegrini that is the last thing we need.

And just by way of an added assurance this ain’t gonna happen CandH was told in a conversation on the ‘phone with a well placed insider: “Absolutely no way – far too much baggage attached to that one.”

← Poll: Should the ten per cent away ballot continue?
Merson admits he was so wrong about West Ham →

4 comments on “Mourinho and West Ham”