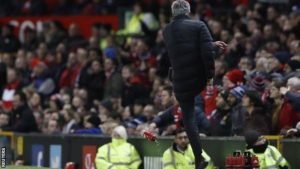 Manchester United manager Jose Mourinho has been charged by the Football Association for kicking a bottle in frustration during the 1-1 draw against West Ham at Old Trafford on Sunday.

Mourinho was sent to the stands by referee Jon Moss was been charged with improper conduct on Monday. He has until 6pm on 1 December to respond.

It is the second charge for the Portuguese man in two months after he was sent off against Burnley on 29th October. Mourinho received a one-match ban and an £8,000 fine for that incident.

Because Mourinho has already been sent off this season, the punishment for Sunday’s offence will be determined by a commission, whether he accepts or denies the charge. The former Chelsea, Inter and Real Madrid boss was also fined £50,000 for comments he made about referee Anthony Taylor before the Liverpool match at Anfield on 17 October.

Jose Mourinho was previously charged with misconduct by the Football Association over his language and behaviour in Chelsea’s defeat by West Ham last season at the Boleyn Ground when he was sent to the stands after going to speak to referee Jon Moss in his room at half-time. on that occasion he was given a one-match stadium ban and fined £40,000 after accepting the misconduct charge.