Moyes and Brady on Wenger departure 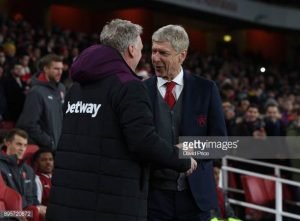 David Moyes was asked whether he will miss Arsene Wenger from the Premier League at yesterday’s press conference.

Moyes told reporters: ‘I don’t know if missing him is the right words but real football people appreciate what he’s done and I think he is a proper football man, lives and breathes it, dedicated to his job and his sport.I got to know him a little bit at different times and he’s a real proper football man and works really hard.’

Quoted by one reporter of Moyes odds of 150/1 to get the Arsenal job Moyes said: ‘It’s never easy when you follow great managers at great clubs. It’ll be tough for whoever takes the job.’

Moyes added: ‘I’d probably wish it hadn’t been announced before this weekend but most people appreciate Arsene and what he has done in football. I respect him for what a good football man he is.’

Karren Brady told the Sun on her football column ‘IT’S the end of an era. Arsenal without Arsene is like Ant without Dec, life may  go on — but it’s just not the same. I was 27 years old and running Birmingham City  when Arsene got the job, an unknown man from an unknown club.’