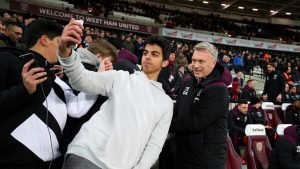 David Moyes has asked West Ham supporters to stick by his team and his players to help avoid relegation saying it is the best chance of survival.

Speaking to WHUFC.com Moyes said: “I’m not an expert on West Ham, as I haven’t been here long enough, but I know that everyone being together gives us the best chance of making sure we’re a Premier League team, and we’re going to need that.

“The support here is tremendous, in as much as the numbers they travel in and we’d like to have given them another performance like we did at Huddersfield or Stoke City, but we didn’t, and we’ll go away and try and correct and fix that.

“They’ve been great at London Stadium and I’m going to ask them to stick with the team and the players, and we’ll do everything we possibly can to get us results.”