Posted by Dave Langton on November 17, 2020 in News, Whispers

David Moyes could be without Said Benrahma for a considerable period of time in 2021.

The Algeria international has been away on international duty, playing for his country as they have attempted to qualify for the African Cup of Nations. 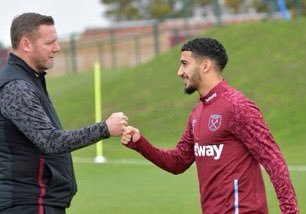 He played a key role in the 2-2 draw with Zimbabwe, providing a superb, looping assist for Manchester City star Riyad Mahrez, who somehow controlled the ball with his heel before beating two defenders and finishing.

The draw means Algeria will be present at the tournament, which has been moved due to the COVID-19 pandemic.

Football.London reports that the African Cup of Nations, originally scheduled to take place in June and July of 2021, will be held in January and February of 2022.

That’s slap bang in the middle of the Premier League season and Benrahma is almost certain to be a part of his international squad.

He has won six caps for his country and is a mercurial presence for the side.

Arthur Masuaku could have also been heading to the competition but DR Congo lost on penalties to Madagascar in a play-off game, meaning the left-back will be staying in east London in 2022.