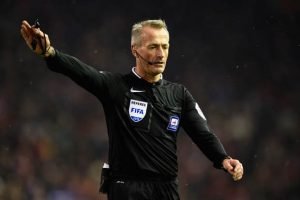 Martin Atkinson has been announced as Saturday’s ref at Swansea which may not go down too well with David Moyes.

The official has taken charge of four games involving the Irons this season and have lost two and drawn two.

He was in charge of the defeats against  Manchester United and Brighton & Hove Albion in the opening couple of months of the season and the 1-1 home draws with Leicester City and Bournemouth.

Moyes has yet to win for the Hammers with Atkinson as the man in the middle and his record over the previous eight years does nothing to inspire confidence.

Following Everton’s 3-3 draw with Manchester United in September 2010, the official has been in charge of a further 13 games involving Moyes.”

Moyes said at the time: “There was more time to add on for the goals and he blew up with the ball 25 yards from their goal.
Permalink